After Park Si Hoo’s debut movie “Confession of Murder” was released in S. Korea on November 8, 2012 it hit the box office with over 2,000,000 viewers and travelled around the world in 2013. The movie was sold to Japan (Twin Co), China (Shanghai Vision Film), Indonesia (Ram Indo), French-speaking Europe (Synergy Cinema) and German-speaking Europe (Splendid Films).

“Confession of Murder” was screened in various cities in Japan for a very long time. Followed by Hong Kong, Singapore and Taiwan. The movie was invited to film festivals in the USA and Canada, featured at Florence Korea Film Fest 2013 in Italy and l’Etrange Festival 2013 in Paris, France.

The MV below shows the making of “Confession of Murder”.
Enjoy watching.^^

Source of information: ParkSiHoo4U, thank you!

All of the fans who are voting on regular basis know that
Park Si Hoo and his dramas/movie are topping or being in top of various voting competitions being held in S. Korea, Japan and China. From here you can easily vote after clicking on top Vote for PSH.

At times the competition was fierce and needed all hands on deck for international fans. They never slacked off, because Park Si Hoo is worth it!

To celebrate this special achievement the webmasters of PSH4U created a MV. The MV is set to Park Si Hoo’s own song “For You” and dedicated to our beloved Si Hoo ssi and to all Park Si Hoo fans who have voted so diligently and consistently for him for
365 days. 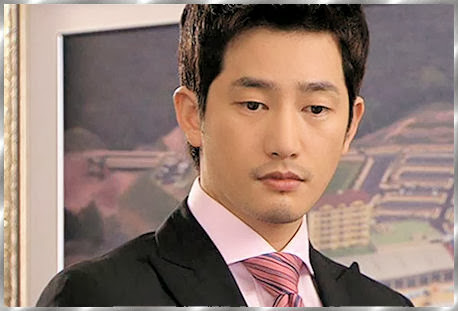 Yoo Joon Suk was meant to get married to Go Hye Mi, but fell in love with Jung Yoon Hee. Originally the secretary of his father who became his when he had to take over the lead of the company unexpectedly.

I have read many times Yoo Joon Suk is a weak personality. I would rather say he is a sad person. Not happy with his life and not able to change it by himself. Trapped by family obligations and dominated by a mother he could not oppose. Especially not when she threatened to kill herself, if Joon Suk would continue his relationship with Yoon Hee.
The marriage between Joon Suk and Hye Mi was part of a conspiracy between the mother and Hye Mi’s father. The mother was under control of Hye Mi’s father, because she knew about and was involved with illegal actions. Hye Mi herself had committed an illegal deed as well. Only at the end of the drama when the police came to arrest both Hye Mi and her father at the wedding day of Joon Suk and Hye Mi, Joon Suk got freed from all unwanted ties. 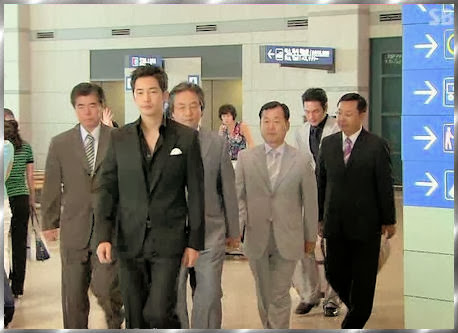 The first time when Yoon Hee saw Joon Suk surrounded by company men he looked very arrogant. Yoon Hee wanted to introduce herself to him, but Joon Suk’s disturbed look made her keep silent at once.

Yoon Hee was a very cheerful person, but also naive and always believing in the good of all people. She kept being herself despite the bad treatment of her new boss. Slowly she broke through the frozen attitude of Joon Suk. He cheered up every time Yoon Hee was around him. 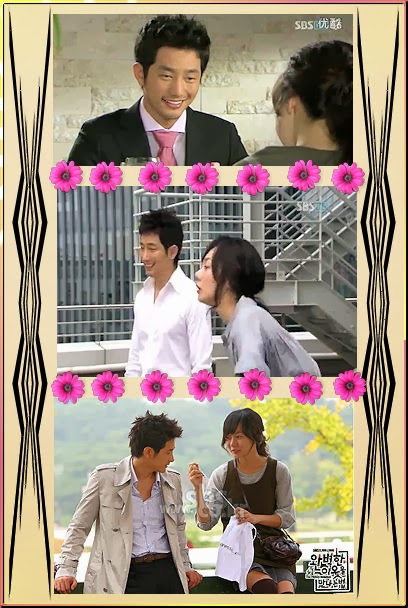 Though Joon Suk started to fall in love with Yoon Hee and wanted her to be with him the rest of his life, he could not offer her a marriage. At first Yoon Hee thought she could deal with being the mistress only, but afterwards she felt too much hurt.

Yoon Hee had a very good friend in Baek Soo Chan. Gradually, Soo Chan had fallen in love with Yoon Hee. He knew about her love for Joon Suk. Still he supported her the best he could and cheered her up when she was in deep pain. Yoon Hee was not aware of Soo Chan’s real feelings for her immediately. Joon Suk knew about Soo Chan’s feelings for Yoon Hee too. He behaved very jealously. Though he was with two women himself, he could not allow Yoon Hee with another man besides him as well. Even if that man was just a good friend to her.

Joon Suk’s fiancée, Hye Mi, was living nearby in the same neighborhood. Hye Mi did not stop to tell Yoon Hee that she was nothing compared to her, the official accepted fiancée. She would allow her to be Joon Suk’s mistress, but she should never forget her place. So Yoon Hee broke up the relationship with Joon Suk. Joon Suk cried when she did. He tried to change Yoon Hee’s mind, but he could not cancel the wedding arrangements with Hye Mi. The main reason why Yoon Hee broke up with him.

After the break up Joon Suk became the same indifferent person from the beginning. Hiding his real feelings perfectly. When Yoon Hee asked for a post in the company in the United States of America Joon Suk did not refuse. He even thought it would be for the better.
Baek Soo Chan was also going to the company in the United States. So Joon Suk knew Soo Chan would look after Yoon Hee. Joon Suk had told Yoon Hee before there was another man who loved her as well.

However, the arrest of Hye Mi and her father when she was supposed to get married to Joon Suk changed everything.

The day of the wedding Yoon Hee visited Joon Suk’s mother who was hospitalized because of dementia that got worse. At the moment of this visit Joon Suk’s mother had a clear mind and recognized Yoon Hee being the kind secretary of her late husband. She told Yoon Hee to stop the wedding between her son and Hye Mi, because she had been wrong and Joon Suk loved her, Yoon Hee.

When Yoon Hee finally arrived at the wedding the police was taking away Hye Mi and her father for the crimes they had committed. Joon Suk and Yoon Hee hugged and Joon Suk apoligized to Yoon Hee. She accepted his apologies. 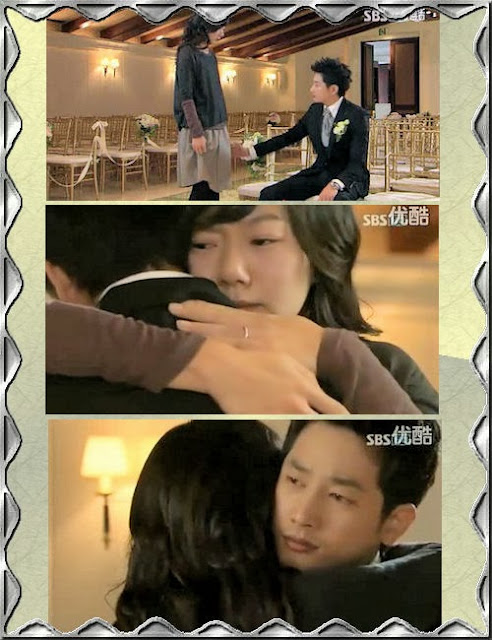 It’is true Joon Suk did not do anything to fight for his real love. He could not allow his mother would be arrested for her crimes. It was due to circumstances Joon Suk got back to Yoon Hee. Though she could not be his mistress Yoon Hee never stopped loving Joon Suk. Despite Soo Chan loved her as well and would gladly make her his wife, Yoon Hee could not turn her back to Joon Suk. So when Joon Suk apologized for having been a weak man, she could not refuse his apologies. Her deep love for Joon Suk and the knowledge that he needed her could deal with the hard times he had made her suffer because of his weakness. Every man is backed up by a woman. Yoon Hee was that woman for Joon Suk.

The literal translation of this OST is “Injured ankle”, but “Hurt” may sound more familiar. Yoo Joon Suk is a pitiful man with a weak character who doesn’t have the courage to oppose the wishes of his mother. The woman whom he is in love with can’t deal with being his mistress only. Meet with Park Si Hoo as Yoo Joon Suk.^^

I wanted to show a MV of “Which Star Are You From?” to give an idea of Park Si Hoo’s role in this drama. The one I had in my list was deleted by YouTube. So I’ve been searching for another one. The best I could find with Park Si Hoo is this MV. It’s a mix with another drama and another actor, but as Park Si Hoo is 2nd lead in “Which Star Are You From?” all other MVs are focussed on 1st lead. Still hope you will enjoy watching this MV mix.^^

Let’s have some fun with Jean Thierry Cha/Cha Seung Jo.^^

“Cheongdam-dong Alice” is Park Si Hoo’s last drama.
Jean Thierry Cha/Cha Seung Jo is a very cute person.
In this drama we are acquainted with the comic side of
Park Si Hoo.

These were the first VDOs I came across when I started my search for Park Si Hoo second half of 2011. I remember how happy I felt because of the English subs.

It’s a close-up coverage of Park Si Hoo’s first Japan Fan Meeting on
July 5, 2009 in Tokyo by MBC. The Fan Meeting was called “First Story of Park Si Hoo”.  Hope you enjoy watching as much as I did and still do!^^

Fans go crazy when Park Si Hoo is making dance moves, singing, hugging fans on stage and interacting with his fans in general during one of his fan meetings. Although this VDO is blurred and a bit shaky by times I still want to share it with you. Whenever you may have the opportunity to attend one of Park Si Hoo’s fan meetings you’ll have an idea of what you can expect. A lot of fans in China and Japan already have exciting memories which they will cherish their entire life. Will you be next one? Please, enjoy watching!^^

In 2011 “The Princess’ Man” was my introduction to Park Si Hoo. I got caught under his spell and ever since I am one of his many loyal fans. Once you’ve caught the Park Si Hoo “flu” you won’t be able to get rid of it.  Park Si Hoo is the finest man and best actor I have ever come across. He has caught my heart and I cherish him.

This MV of the OST “Today, Again I Love You” by Baek Ji Young I like very much. Park Si Hoo (Kim Seung Yoo) and Moon Chae Won (Se Ryung) showed a lot of chemistry on screen. They were awarded “Best Couple” at KBS Awards 2011.

If you accept this notice, your choice will be saved and the page will refresh.

↑
We are obliged to inform that the website "Park Si Hoo....Korean Actor" is using cookies and request for permission to do so. Information about your visit and interests is collected via cookies. Therefore, cookies contribute to a pleasant website experience. In addition, cookies from third parties ensure that you can share articles via social media and that you can watch videos on the website. After accepting the cookies, you can still revoke your permission later.OkNo
You can revoke your consent any time using the Revoke consent button.Revoke cookie permission